The Earth is home to more than 2,98,000 species of plants! This diverse group balances nature and life on the planet. Some plants produce beautiful pleasant smelling flowers, some produce nutrient-rich fruits, while others have medicinal properties. But there is one group of fauna that challenge the mundane stereotype of plants thanks to their strange behavior and appearance. These 7 bizarre plants, native to various places around the world, have unique characteristics that you never knew existed! 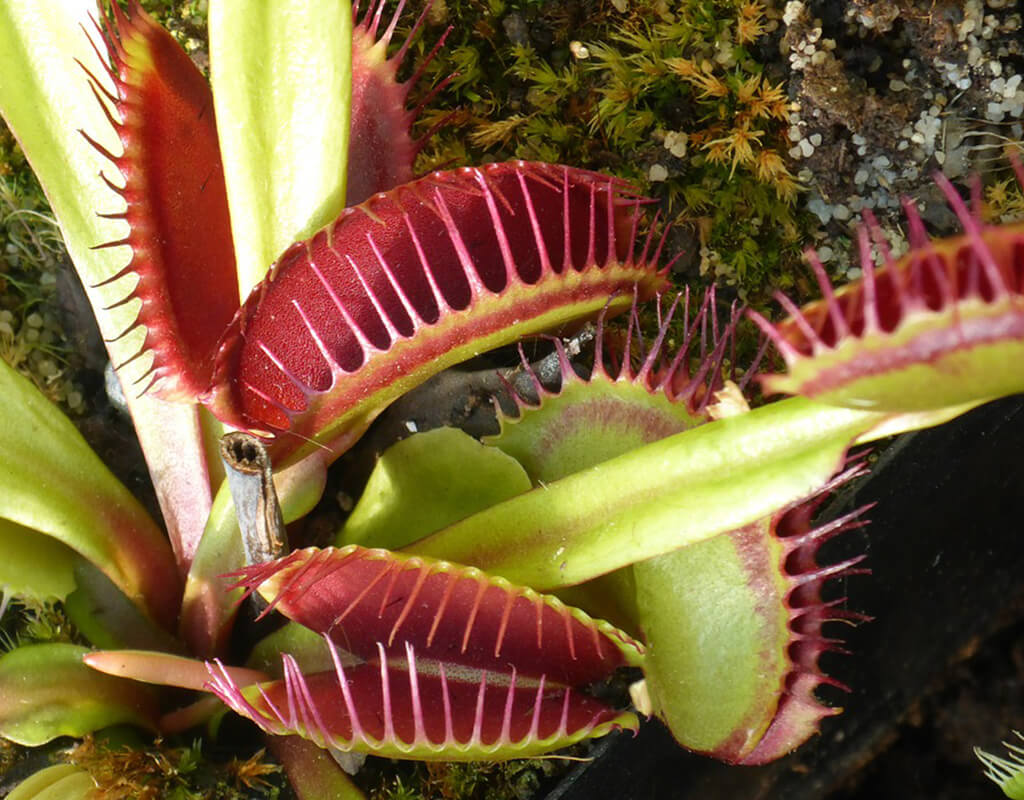 Dionaea Muscipula, also known as the Venus Fly-Trap, is a famously known carnivorous plant native to the subtropical wetlands on the East Coast of the United States in North and South Carolina. The plant consists of highly active and efficient hinged leaves covered in ultra sensitive fine hair that detect the presence of mainly insects and arachnids.

What makes it Bizarre: Triggers to these fine hair will cause the hinged leaves to shut in less than a second, trapping the unsuspecting prey to ultimately digest it!

It’s not pretty to look at, but Namibia’s plant Welwitschia Mirabilis can truly claim to be one of a kind. Welwitschia consists of only two leaves and a sturdy stem with roots. The two leaves continue to grow about 8 metres wide and 2 metres high. However, the stem only thickens instead of growing in height. The plant is said to be very tasty either raw or baked in hot ashes, and this is how it got its other name, Onyanga, which means onion of the desert.

What makes it bizarre: Their estimated lifespan of a Welwitschia is 400 to 1500 years. It can survive up to five years with no rain! 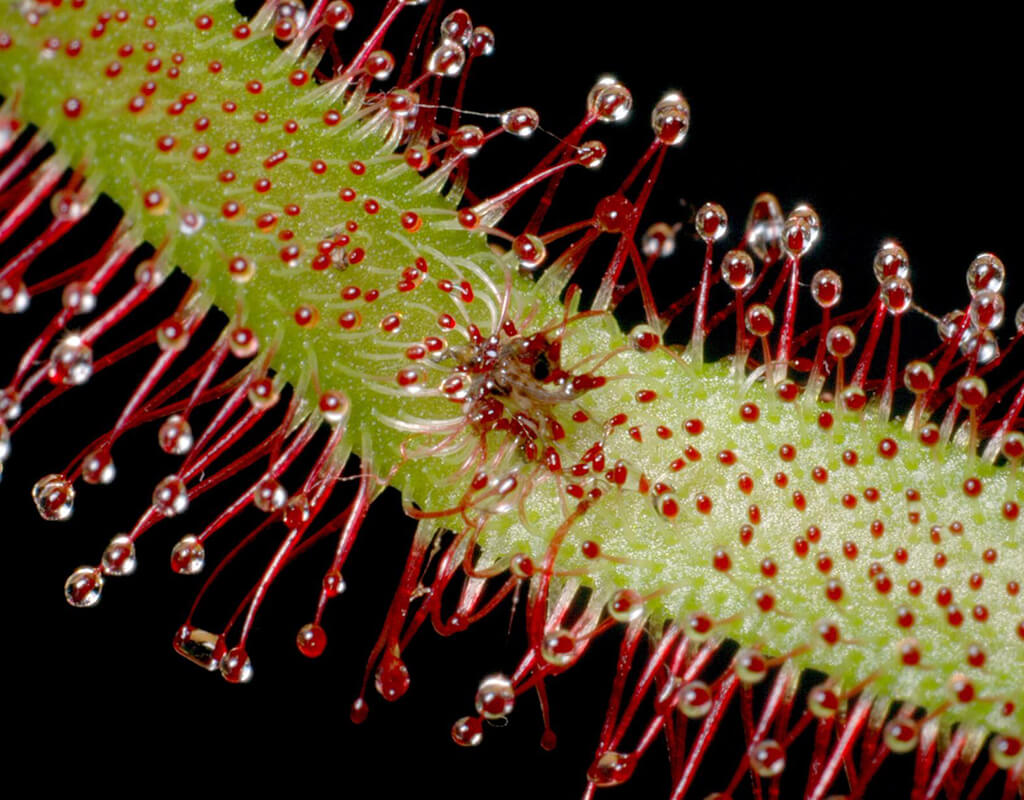 You have probably realised that there are more carnivorous plants than you had initially imagined. The Drosera Capensis, commonly known as the Cape Sundew, native to South Africa, are covered in brightly colored tentacles which secrete a sticky mucilage that traps arthropods.

What makes it bizarre: The tentacles slowly roll lengthwise and wrap the trapped prey within an hour. This is fairly a slow process but invasively cruel. 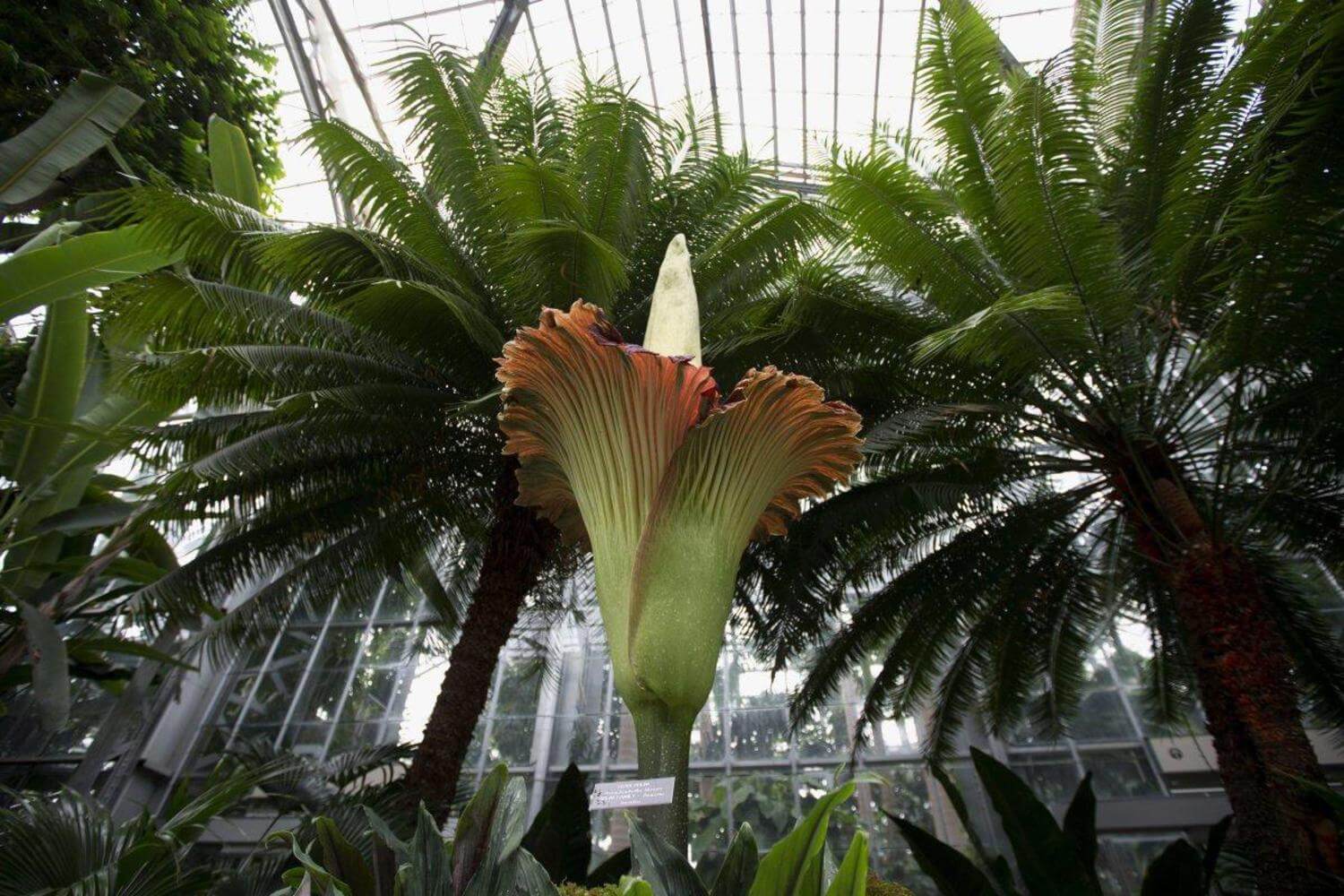 Amorphophallus Titanum, also known as titan arum, is a flowering plant reaching about 3 metres in height. Growing in the openings of rain-forests native to the Sumatra and Java islands of Indonesia, these plants have the largest unbranched inflorescence in the world!

What makes it bizarre: The carrion flower, taller than a human, coloured in deep burgundy, mimics the appearance of flesh and possesses an odor of rotting meat. It blooms from late evening to midnight, attracting insects that feed or lay eggs on dead meat, making the arthropods its prey. 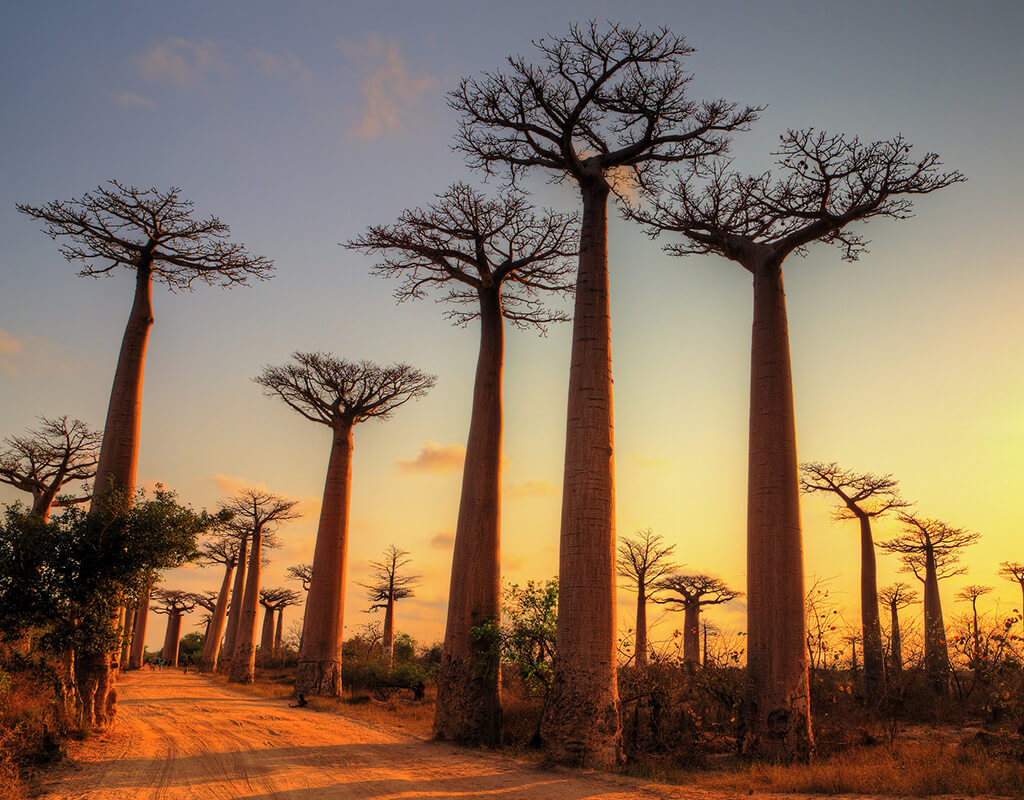 Native to Madagascar, Africa, the Baobab (Adansonia grandidieri), commonly known as the bottle tree, is strangely shaped like a bottle with very few leaves. The tree doesn’t just appear like a bottle but can also typically store around 300 litres of water, increasing their estimated lifespan to 500 years.

What makes it bizarre: Some Baobab trees are 22 metres high storing upto 1,20,000 Litres of water. Some have been carbon dated at over 6000 years old! One such tree has been converted into the world’s only bar inside a tree!) 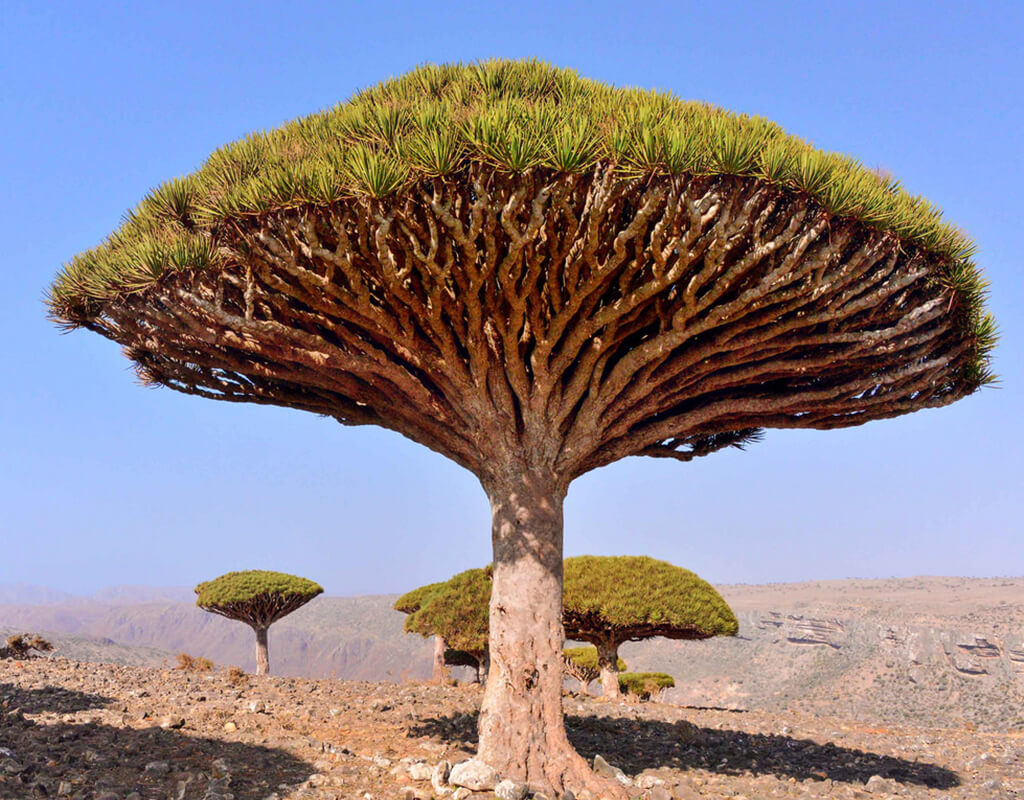 Dracaena Cinnabari, commonly known as the Dragon’s Blood tree, is native to the Socotra archipelago in Yemen, located near the Arabian Sea. It has a unique and strange appearance with an upturned densely packed crown in the shape of an uprightly held umbrella.

What makes it bizarre: It is called the Dragon’s Blood tree because of the red coloured sap it produces. The deep crimson resin was highly prized in the ancient world. The sap is still used today as a dye and as medicine all throughout the Mediterranean Bay. Socotrans use it ornamentally as well as a breath-freshener and lipstick. 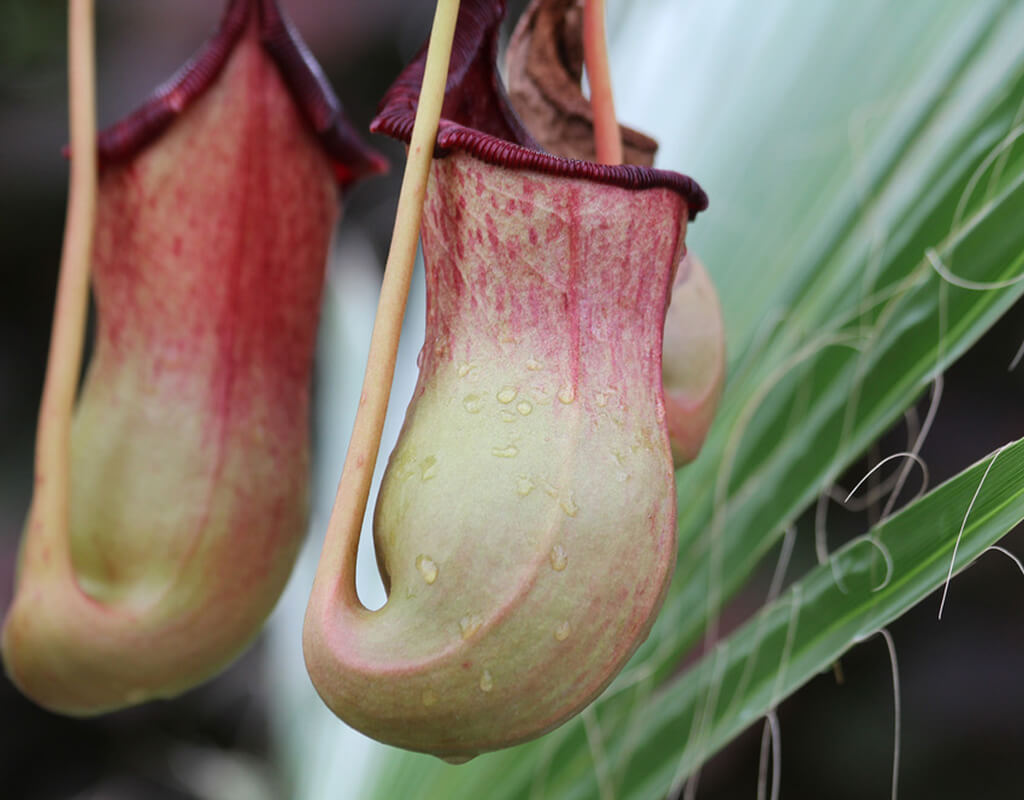 Nepenthes, commonly known as the Pitcher Plant, is native to Madagascar, South-East Asia and Australia. The trap contains a fluid of the plant’s own production, which may be watery or syrupy, and is used to drown prey. The viscoelastic fluid in pitchers is especially effective in the retention of winged insects. Some species of pitcher plants can even consume mice!

What makes it bizarre: The trapping efficiency of this fluid remains high, even when significantly diluted by water, as inevitably happens in rain-forests and tropical jungles.

These bizarre plants are just a few examples among the hundreds of thousands of different species of plants around the globe. However, these aren’t plants you can grow in your backyard. They are exotic and wild in nature. If you want to know more about some unusual plants that can be taken care of and grown at home, check out our plant nursery at Ferntastica Gardens.